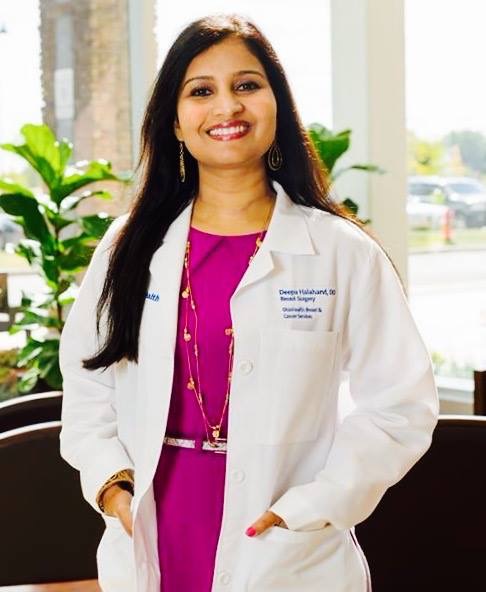 When Deepa Halaharvi, DO, became a breast cancer surgeon in 2014, she said a prayer asking God how she could best serve her patients.

Her prayer was answered, she says with a breast cancer diagnosis of her own.

“Being a patient and a physician will teach you a lot,” Halaharvi said.

Halaharvi has made national news sharing her story with patients; on May 5, 2018, Halaharvi will share some of what she has learned with the graduating classes of doctors and students earning a master’s in biosciences at Kansas City University of Medicine and Biosciences (KCU).

She returns to Kansas City to give the keynote address 10 years after she graduated from KCU with a degree in osteopathic medicine.

“I hope to leave them with a little bit of what I have learned since my own graduation day,” she explained. “Don’t forget to serve. Don’t ever take away hope. And I want to remind them how important it is for physicians to take care of themselves.”

Halaharvi’s speech will take students through her childhood; one of four children and the only daughter of immigrant parents who arrived from India in the 1980’s. She plans to share her story of hard work and sacrifice that finally resulted in a fellowship in breast cancer surgery at Ohio Health. Her speech outlines the thrill of fulfilling her dream of practicing medicine, the fear and suffering that followed her diagnosis and how her experience helps her relate to patients.

As part of the ceremony she will be awarded another degree; a doctorate of humane letters.

“I cannot think of a better person to provide the keynote speech at KCU’s commencement,” said Marc B. Hahn, DO. “She represents the values of the university from which she graduated, and has a unique insight on compassion that our graduating physicians and scientists will want to hear.”

Halaharvi wants all of them to remember they will be treating real people, not just symptoms of a disease.

KCU’s commencement ceremonies can be viewed live via the KCU YouTube and Facebook page, Saturday, May 5, beginning at 9 a.m.

As the call progressed, D’Angeleau Newsome wasn’t sure what to make of it. It was just...

Kansas City University (KCU) continued its commitment to fostering the human element of medicine by...