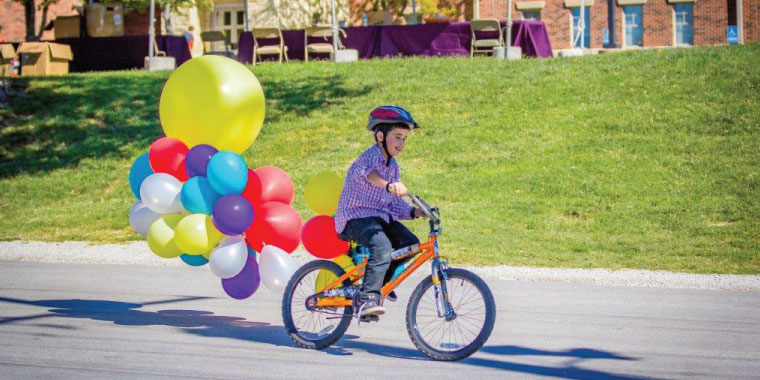 KCU opened its campus to the entire Northeast Kansas City neighborhood for a centennial celebration.

These were a few of the scenes scattered throughout campus Saturday during a neighborhood party marking Kansas City University of Medicine and Biosciences’ 100th birthday.

“Having been a fixture in the Northeast for 100 years, I cannot think of a better way for KCU to celebrate than with our neighbors,” said Sara Selkirk, executive director of community and student activity.

The day started with more than 900 runners and walkers taking part in the Cliffhanger Run 5K and 8K Run. Eric DeRocher, a second year medical student, was the first runner to cross the finish line.

“I do like running this race,” DeRocher said. The avid runner says he and other med students regularly run Cliff Drive during the week.

“It’s a nice break from school, just to not think about anything else,” DeRocher added.

As runners and families from the historic Northeast neighborhood arrived on campus, local band Funk Syndicate played for the crowds. People of all ages enjoyed games, face painting, balloon artists and a free lunch.  More than 1500 people enjoyed lunch under a huge tent on a near perfect fall day.

Kids beamed with excitement as they stood in line to receive a new bicycle and a helmet, courtesy of RevolveKC, the Brain Injury Association of Kansas and Greater KC and the Mother Child Health Coalition.

One moment generating a lot of buzz happened when Sporting Kansas City soccer player Roger Espinoza made an appearance. Espinoza, a native of Honduras, answered questions and posed for pictures with med students and players with the Refugee Youth Athletics Program. The soccer team is made up of young refugees who recently relocated to the area, and helps them assimilate by breaking through language barriers.

“Just welcoming so many neighbors onto campus for a fun day of birthday festivities was truly rewarding to see and be a part of,” Selkirk said.

As the day of activities wrapped, one KCU staffer recalled a young boy riding up on his new bike and helmet, asking if he could have a bundle of balloons.

Watching him ride off, the staffer recalled, “His sheer bliss riding up and down the street with the balloons flying behind him was perfect.”

Thank you to all the staff who worked so hard to make the day a huge success.

Terry and Peggy Dunn named Nonprofit Connect's 2016 “Volunteers of the Year” for their...

Kansas City University of Medicine and Biosciences (KCU) received “Best in Show” at the...

The Kansas City University of Medicine and Biosciences (KCU) Joplin welcomed its second class of...