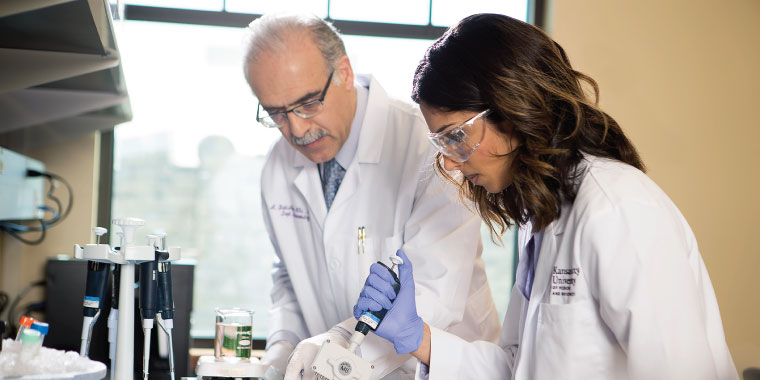 A simple blood test to detect the very early stages of Alzheimer’s disease may one day be a reality. Kansas City University of Medicine and Biosciences (KCU) researcher Abdulbaki Agbas, PhD, has published new research suggesting a blood platelet screening with a specific antibody has the potential to be a useful tool in diagnosing Alzheimer’s disease.

The exploratory study, published in the journal Future Science OA, suggests that an Alzheimer’s selective antibody might be able to identify a chemically modified protein called phosphorylated TDP-43 in the blood of patients who have Alzheimer’s. If Alzheimer’s can be identified before the patient realizes he or she has it, early treatment with current and future medications and lifestyle changes may be more effective.

“This is an urgent task to identify better biomarkers for Alzheimer’s disease, as well as for other neurodegenerative diseases,” said Agbas. “The new biomarker should be sensitive, selective, reliable and affordable, and involve a non-invasive sampling method.”

More than 5 million Americans currently live with Alzheimer’s disease. The number is projected to grow to 13.8 million by 2050. The rising cost of healthcare for patients who suffer from the disease has a devastating economic impact as well as a strain on caretakers and families .

The study was initiated at KCU and received a pilot grant award from the University of Kansas Alzheimer’s Disease Center. Kansas City University College of Osteopathic Medicine students participated in the research.

Agbas stresses the research is still at an early stage, but he is hopeful for advancements in the near future. “This study will provide some clue for diagnosing early-stage Alzheimer’s disease,” said Agbas. He hopes a valid blood-based biomarker will be developed during the next four to six years. “I am excited with this achievement, and I hope to contribute to the field of biomarker development for neurobiological diseases.”

Kansas City University medical students who have an interest in oncology and a heart for the...

Eugene Konorev, Ph.D., Associate Professor of Pharmacology and Microbiology of the Kansas City...

KCU Research Symposium is "A Day of Discovery"

Kansas City University of Medicine and Biosciences celebrated science with its annual Research...