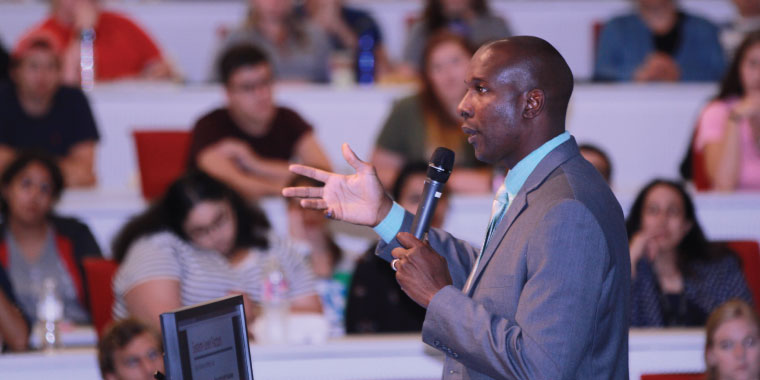 That question posed by a Duke University medical school professor to Damon Tweedy, then a first-year medical student, became a defining moment for the now doctor of psychiatry, lawyer and best-selling author.

Dr. Tweedy believes the professor assumed he was an employee in class to change out a lightbulb. But the exchange with the professor had an impact on Tweedy.

“A situation can happen to you that can reinforce that internal belief you’re already struggling with,” Tweedy said.

Tweedy is the author of Black Man in a White Coat, a New York Times bestseller that reflects on his experiences regarding race issues inside the medical profession. He recently spoke to KCU students, faculty and staff. The University, along with the Center for Practical Bioethics, sponsored the event.

“I’m listening to the lecture and I thought it was phenomenal,” said Tarris Rosell, PhD, Division Chief of Bioethics at KCU and Rosemary Flanigan Chair at the Center.

Rosell said the idea to invite Dr. Tweedy to speak came out of a strategic planning session of the Center for Practical Bioethics.

“We made this topic part of the Center's strategic initiatives which correlates with that of KCU as we try to address diversity and inclusion on campus,” Rosell added. “Dr Tweedy had just published his best-selling book, and was an easy pick to help us progress on our initiatives.”

Students, faculty and staff filled the 400-seat auditorium to hear the doctor deliver his message. His presentation was also live streamed to the KCU-Joplin campus.

Second-year College of Medicine student Dominic Royster read Tweedy’s book during his summer break and said he was excited to see him talk with future physicians at KCU.

“Dr. Tweedy's personal testimony as a medical student, physician and patient eloquently addressed the issues minorities face in the health care system,” Royster said. “There were many moments that give me pause as Dr. Tweedy's experiences very much mirrored my own.”

“I walked away with a new sense of motivation as a minority medical student,” Royster added. “I will strive in my academic and clinical pursuits to help break down racial barriers in doctor-patient care.”

Clark adds, “Dr. Tweedy’s story of his pathway to medical school told us something we already knew – there are children among us with the capability to become physicians who do not know they have the skills for this career and may not be aware the opportunity could be available to them.  Someone somehow needs to reach these children, educate them and help to guide them."

Dr. Tweedy keeps a busy schedule traveling often twice a month to speak at medical schools, college campuses and hospitals. He acknowledges that the issues facing race and medicine will obviously not be resolved in a one hour discussion. But it is a starting point, and each student can have an impact.

“You have a tremendous impact on patients sometimes without even realizing,” Tweedy said. “It’s a gift, but it’s also a tremendous responsibility. I think we should never lose sight of that in the hustle and bustle in the life of medicine.”

Tweedy says that exchange he had many years ago with his professor motivated him to excel in medical school and become one of the top students in his class.

“I was worried I was going to become another statistic in that same way,” Tweedy said. “By me studying so much and by doing well, it was a sense of validation that I really did belong and that I could succeed."

During National Hispanic Heritage Month, KCU is honored to recognize the contributions and...

Chanel Epps, first-year med student, discusses what motivates her in her pursuit of...

Janet Han, KCU-Joplin third-year med student, has wanted to be a physician since middle school. She...