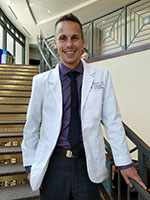 You would never know Ian Kloehn has a physical impairment by looking at him. That’s just the way he likes it.

“I wait to tell people after they get to know me,” he explains with a smile.

It’s somewhat amazing that Ian, a first-year KCU student, is able to keep step with the rigorous pace of medical school, since there are a lot of things he can’t see.

“Optic nerve atrophy,” Ian recites, as if he’s explained it many times. “My optic nerve never fully developed. I can see shapes but it’s hard to make out details. I can see individual words and lines but I can’t tell what they say.”

With 20/200 vision, Ian is legally blind. Glasses will not  improve his sight. As the middle child in a family of three boys, he grew up as a regular kid with medicine and sports a part of daily life. His parents encouraged him to push boundaries and have fun.

“My grandpa is a doctor, my mom is a neonatal nurse practioner and my dad is a biomedical engineer. My parents work hard, stay physically active and are great mentors, “ he said. Ian played soccer, baseball; snow skied and ran on his high school track team. Then the Milwaukee Lakefront Marathon caught his attention during college.

“One of my friends said he was going to run it. Marquette, where I went to undergrad, said they’d pay for it, so I couldn’t pass it up,” he mentioned.

Ian did something many seasoned runners take years to accomplish: he qualified for the Boston Marathon on his first try and won his division. He’s now ranked third in the United States among visually impaired runners. Last fall he ran the Kansas City Half Marathon, then the Blind/Visually Impaired National Championships in Sacramento. He’ll run the Boston Marathon again in April of 2018. The international nonprofit, Team with a vision, pays his airfare, entry fees and housing.

Ian says he runs 7-8 hours per week. It helps relieve the stress of medical school. “I can focus on tiring myself out,” he said. “It’s a great way of keeping strong mental health.” When does he study? “The rest of the time,” he laughed.

Since he can’t drive, Ian gets around by bicycle. He has a strong circle of friends at KCU. “He genuinely cares about you and it shows through his interactions,” said fellow student and running partner Landon Shea. “It is because of these same reasons that he will become a great doctor. As for the running, he simply tries his best at everything he does. He is his own biggest competitor, but the end of the day he makes sure he is having fun with the experience.” 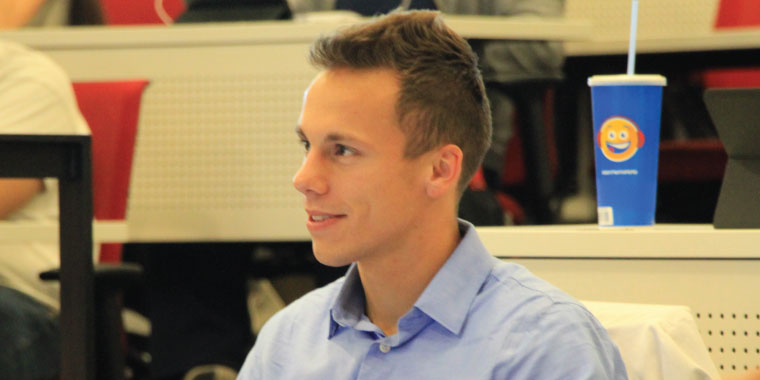 Aside from getting the big-screen materials on his iPad, which he holds close to his face, Ian hasn’t asked for many modifications in medical school. “I don’t like to have people go way out of their way to make adaptations unless I really need them,” he explained.

“I think he has used his visual impairment as a motivational tool rather than a hindrance or an excuse,” said Robert Walker, PhD, who supervises Ian’s course work. “Ian possesses the will and drive to maneuver around obstacles that life has placed in front of him, and this speaks volumes to the physician that he will become.”

Ian plans to specialize in pediatric neonatology and doesn’t consider his visual impairment something to get in the way of his goal. While he was at Marquette, Ian established a sports camp with Vision Forward, a Milwaukee-based nonprofit for blind and visually impaired kids. “I told them to just keep working hard, they could adapt sports and still participate despite what others may think.”

Ian sees himself as an advocate as opposed to an inspiration; eager to cheer on anyone who is willing to challenge their physical limitations. “You can do a lot of things you don’t know you can do; I worked with little girl, totally blind who was told she couldn’t play sports. But in the end she was out there running around playing soccer, completely fine. It was crazy.”

Congratulations to KCU’s Student DO of the Year Honorees