The White Coating Ceremony is an important rite of passage for KCU medical students. When faculty place white coats on students, they are sending them on a path to maintain the code of ethics and responsibility that come with being an osteopathic physician. The gravity of the occasion is why, when the Class of 2025 had their white coating celebrations rescheduled (twice!), KCU responded by making sure their ceremonies were held this year, and not just folded into the ceremonies for the incoming Classes of 2026. In all, KCU hosted four white coating ceremonies--two in Kansas City and two in Joplin. 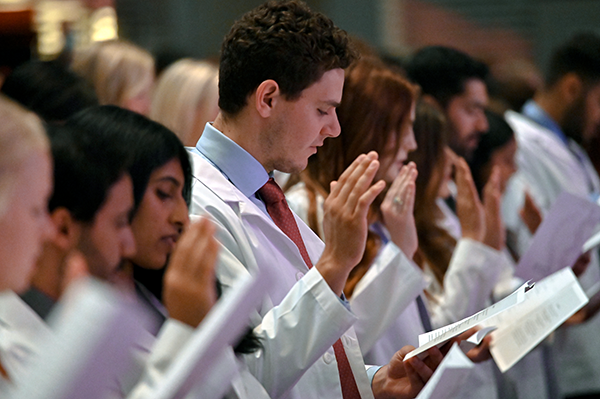 The 275 student doctors of the KCU-Kansas City Class of 2026 were coated later that afternoon with Melissa Robinson, third district councilwoman and president of the Black Health Care Coalition delivering their keynote address. Cameron Smith, DO (COM '09), director of COM Student Success, delivered a powerful rendition of the national anthem in both Kansas City ceremonies.

One week later, the KCU-Joplin Classes of 2025 and 2026 celebrated their matriculation into medical school at the Joplin High School Performing Arts Center. The 161 student doctors of the KCU-Joplin Class of 2025 gathered with family and friends that morning for their white coating ceremony, followed that same afternoon by the white coating of the 164 KCU-Joplin Class of 2026 student doctors. Robert McNab, DO (COM ‘02), vice president of Medical Education for Freeman Health System was keynoter for both Joplin ceremonies and spoke on the significance and symbolism of the white coat. Student doctor Shilpa Bhat, OMS II, provided a lovely performance of the national anthem for both Joplin ceremonies.

Congratulations to these student doctors. We are so pleased you chose KCU to be part of your journey.

KCU student helps families of those who made the ultimate sacrifice on Sept. 11.

“It Was Easily the Most Terrifying 38 Minutes of My Life”