(Joplin, Mo. – May 9, 2021) -- Kansas City University’s (KCU) Farber-McIntire campus in Joplin, Missouri, held its inaugural commencement ceremony, marking history both with its first graduating class of 131 osteopathic physicians and keynote addresses from a three-star general and the president of the American Osteopathic Association. 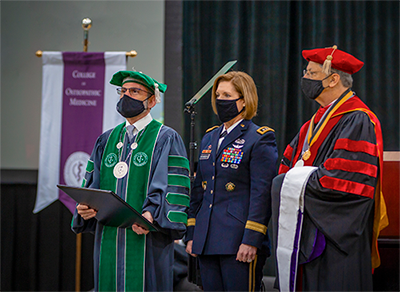 “For generations, service members have been called heroes for all they’ve done,” Richardson said. “I’m here today to extend that same honor to you. It is you who have become the heroes.”

Health care runs deep within Richardson’s family. She is the daughter of KCU alumnus Darwin Strickland, DO. Her sister also is a physician who graduated from KCU’s College of Osteopathic Medicine. As the commander of U.S. Army North, Richardson oversees multiple defense and security initiatives, including the COVID-19 pandemic response. She knows first-hand the burden that has been shouldered by medical professionals during this public health crisis.

Thomas Ely, DO, president of the American Osteopathic Association and a KCU alumnus, congratulated the students who earned a Doctor of Osteopathic Medicine, thanking them for “rolling with the punches” during the pandemic, and urging them to enter the world of osteopathic medicine with humility. “You are now joining a proud profession, one that values the relationship between physician and patient, and recognizes that a person’s state of health depends on the body, mind and spirit.”

KCU-Joplin conferred the doctoral degree from the College of Osteopathic Medicine on 131 graduates. While completing the degree Doctor of Osteopathic Medicine, four graduates also received a Master of Arts in Bioethics through KCU’s partnership with the Center for Practical Bioethics, and six graduates also earned a Master of Business Administration in Healthcare Leadership through the university’s partnership with Rockhurst University. Additionally, eight graduates were commissioned as officers in the United States Armed Forces by Major General Philip Volpe, DO, who also serves as KCU assistant professor of Primary Care.

KCU-Joplin bestowed a Doctorate of Humane Letters on Lt. Gen. Laura Richardson and on Mr. Rudy Farber, fundraising chair for the Joplin Regional Medical School Alliance. This honorary degree is reserved for those who have distinguished themselves through significant humanitarian and philanthropic contributions to society. Richardson received the honor in recognition of her tireless efforts as a military leader, her contributions to our country, her support of the mission of higher education and her steadfast commitment to improving the well-being of the communities she serves. Farber received the distinction in recognition of his unparalleled support of KCU’s Farber-McIntire Campus and his outstanding contributions to the medical community.

Marc B. Hahn, DO, KCU president and CEO, addressed the graduates with pride and noted that the achievements they have made under extraordinary circumstances during the COVID-19 pandemic have prepared them all for the journey ahead. “I commend your perseverance in the battle against COVID-19 and in completing your degrees in the midst of great challenges and tragedy,” Hahn said. “And for helping to redefine the future of health care as physicians, ethicists and leaders.”

The entire commencement ceremony can be viewed here.

Kansas City University, founded in 1916, is a fully accredited, private not-for-profit health sciences university with Colleges of Osteopathic Medicine, Biosciences and a developing College of Dental Medicine. The College of Osteopathic Medicine is the eighth largest medical school in the nation, the ninth most impactful medical school in primary care for the nation, the tenth most affordable of private medical colleges, and the leading producer of physicians for the State of Missouri. The College of Osteopathic Medicine has two sites strategically located on the University’s campuses in Kansas City and Joplin, Missouri, to address the growing needs of both urban and rural populations. The University offers multiple graduate degrees:  a doctor of osteopathic medicine; a doctor of psychology in clinical psychology; a master of arts in bioethics; a master of science in the biomedical sciences; a master of business administration in partnership with Rockhurst University; a new master of public health in partnership with the University of Nebraska Medical Center; and plans to seat the first doctor of dental medicine students in 2023.

As the call progressed, D’Angeleau Newsome wasn’t sure what to make of it. It was just...

KCU welcomed 281 students to the medical school class of 2021 in an official White Coating Ceremony...